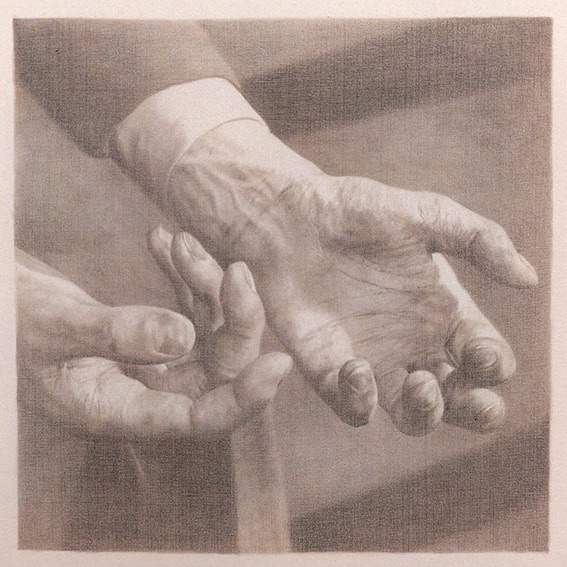 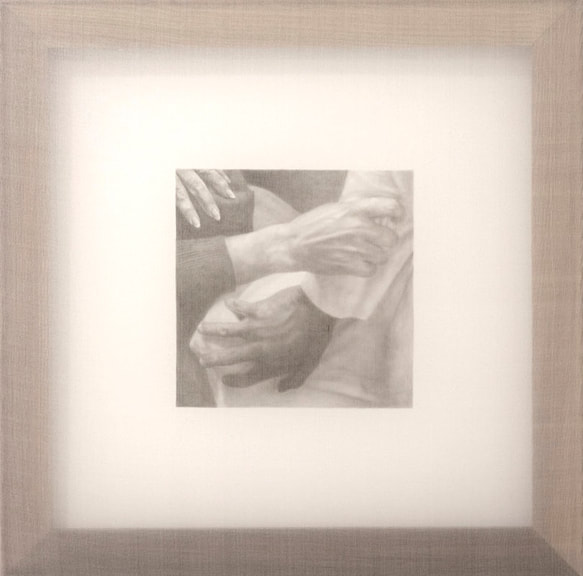 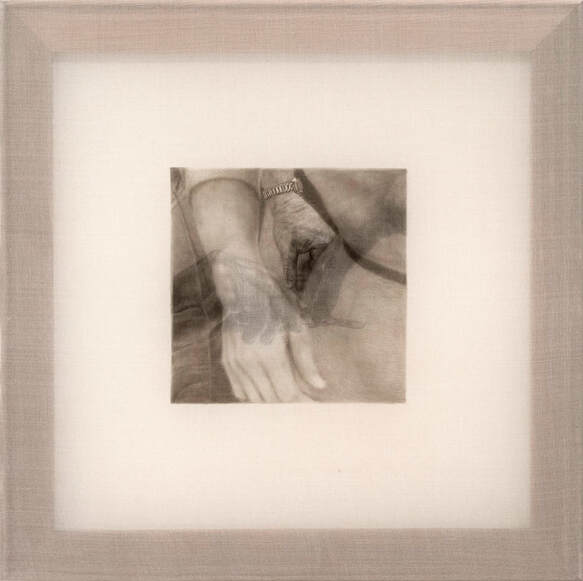 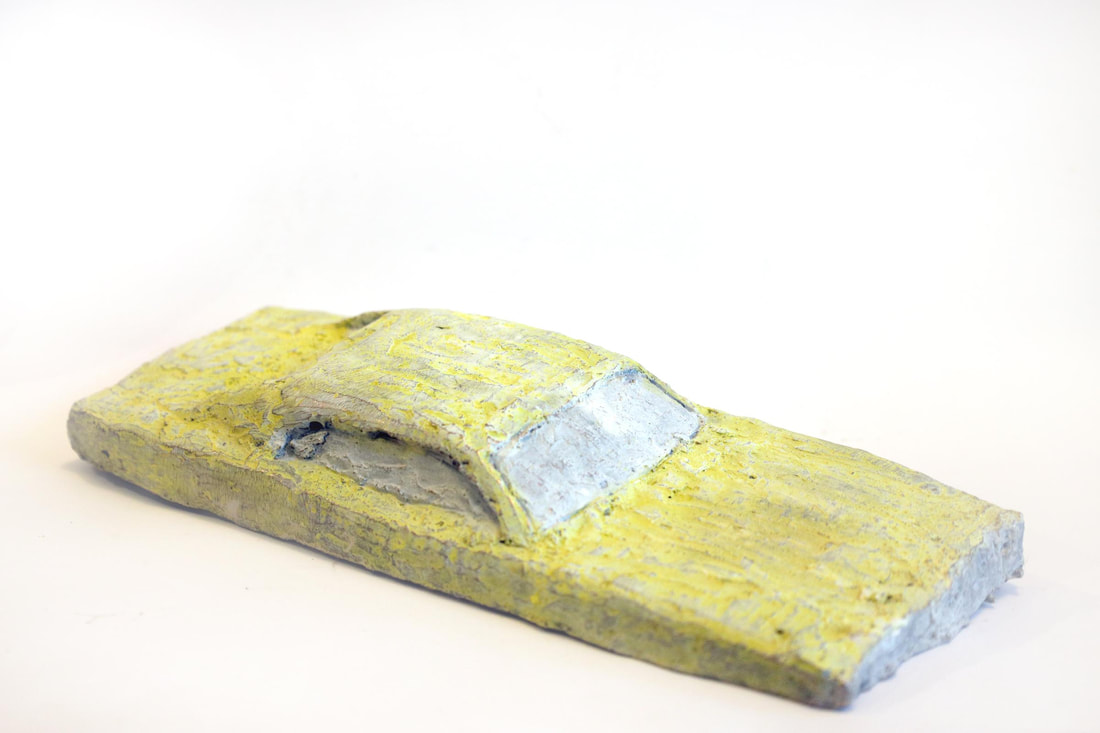 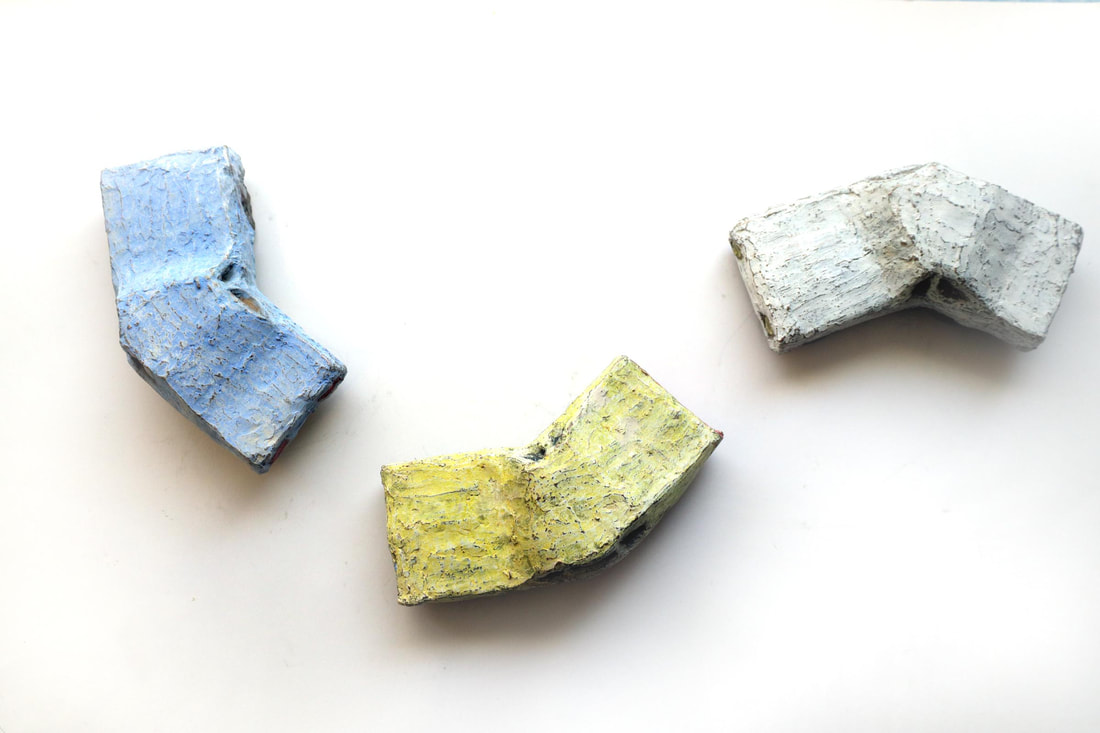 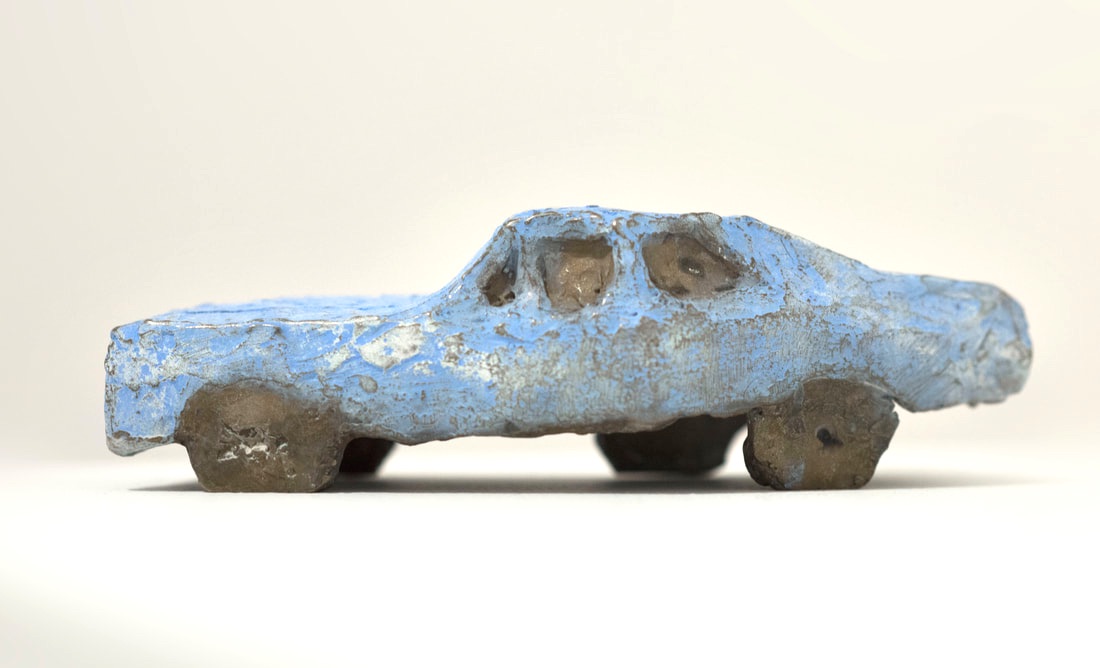 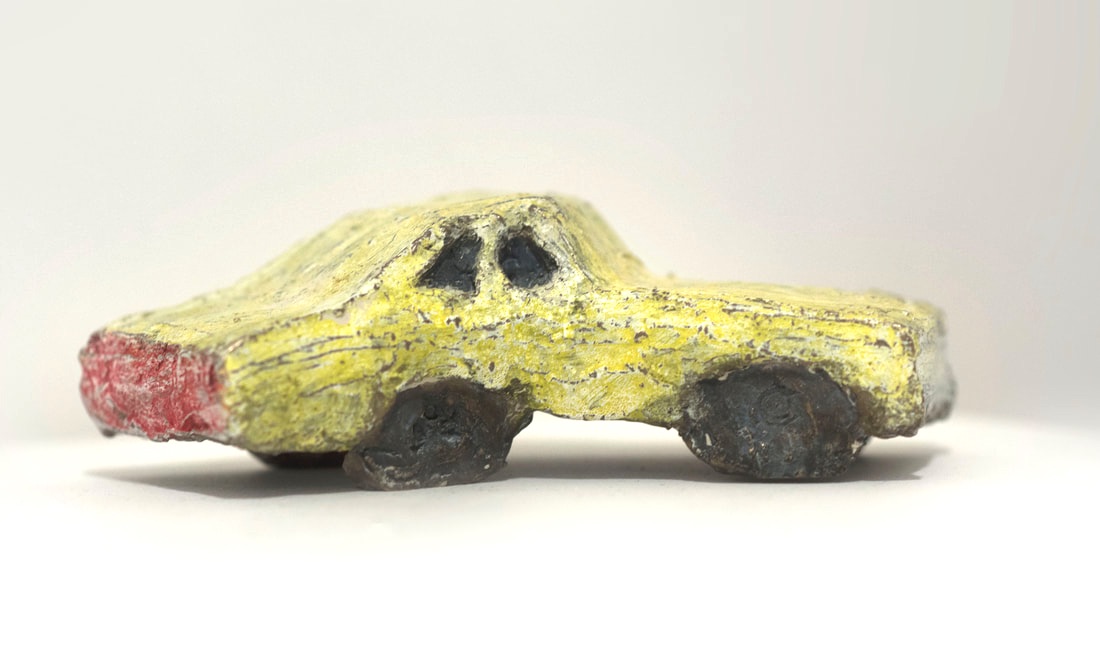 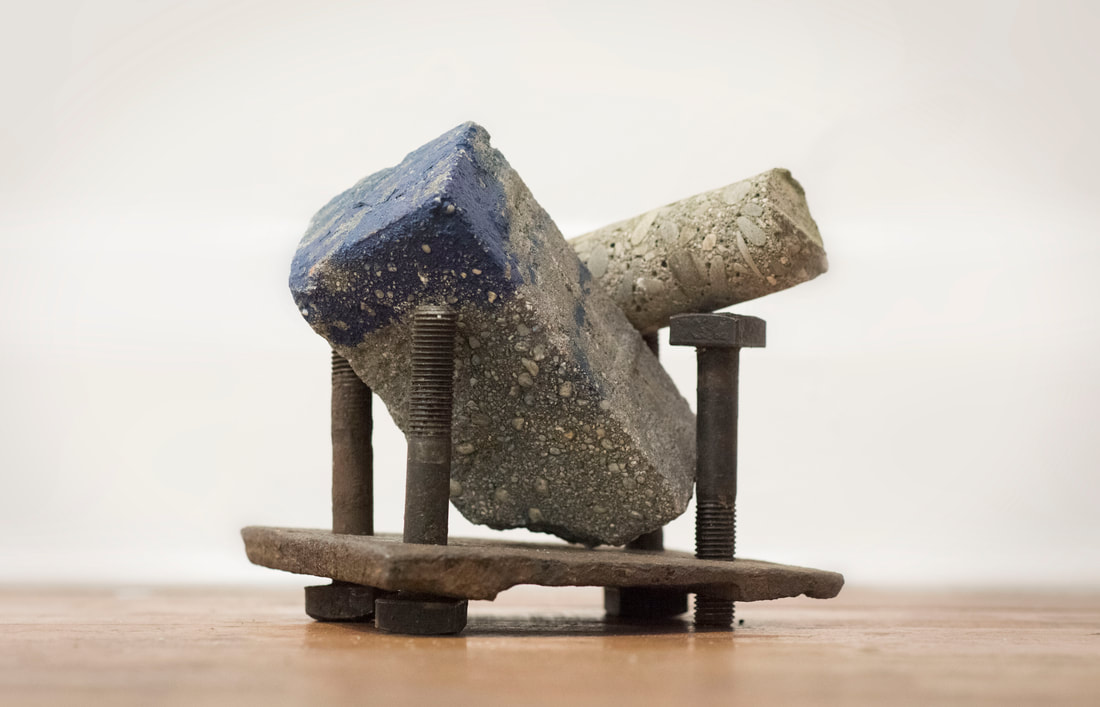 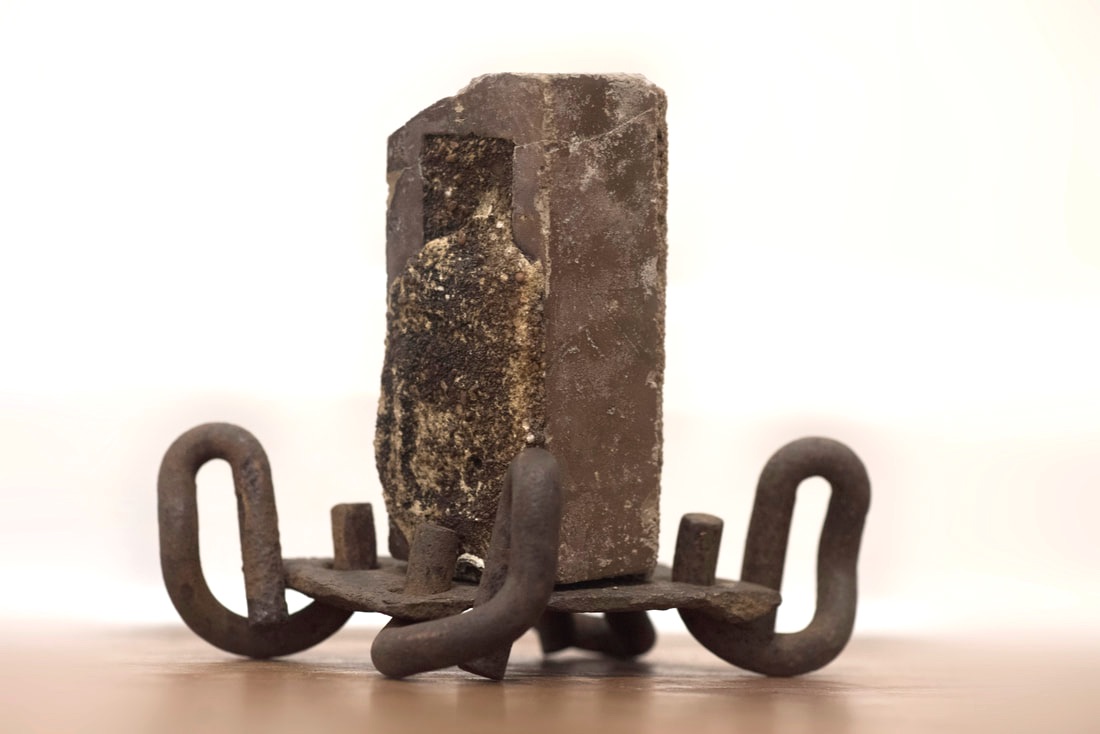 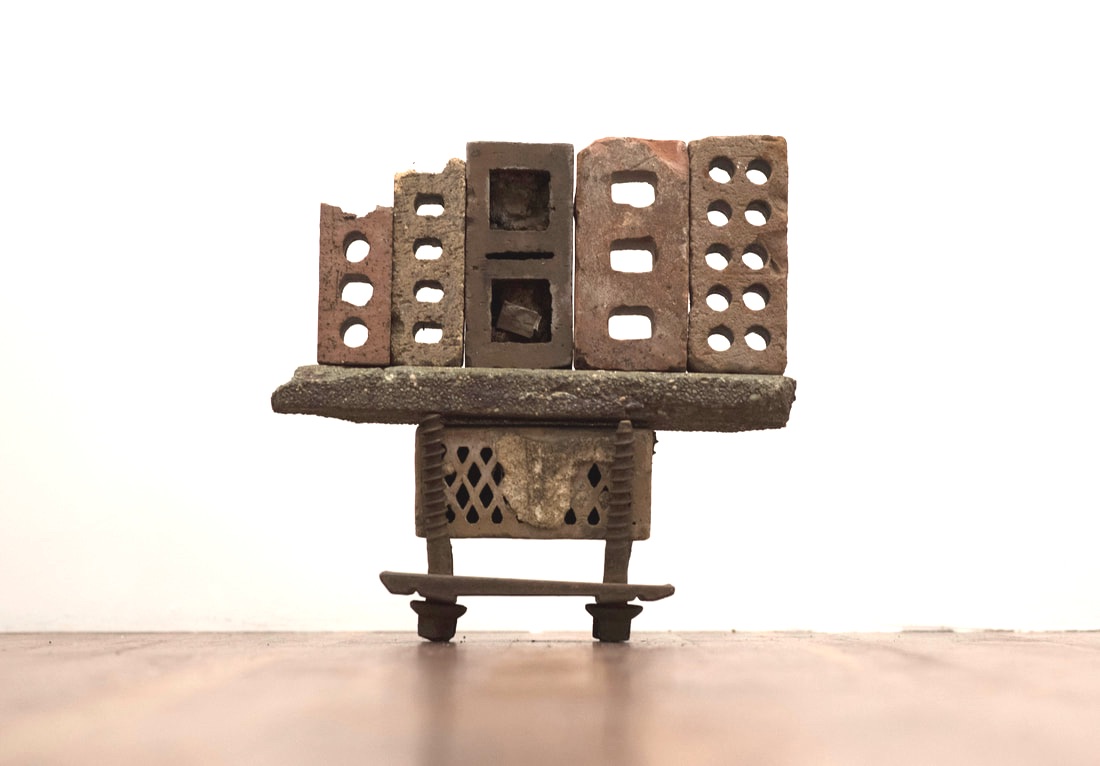 Dene Barnes, Harbourside Redevelopment 1, brick, mortar and steel, 2022
There is a wonderful photo of J.G Ballard (the author of The Drowned World) in his living room on a beach chair. He is lying beneath two gaudy metallic palm trees. He is wearing a black jumper and behind him is a full bookcase. The palm trees are more real than the rest of it all. It is clear he is holidaying at home and the palm trees are a gag - a bit. Ballard is laughing, he looks happy.

A bit is made to be repeated and in doing so the teller or actor becomes an imp - they know how naughty they are to squeeze one more laugh out of this tired old life. It is in the spirit of this impishness that the artists of this exhibition are gathered.

Jackson Harry is a storyteller - through music, sculpture and company. Sometimes the stories are the same from one telling to the next, but then other times they scream into the room like the heat is beneath them, and they are escaping from another age. You could slap a cut of iguana meat on the bonnet and the story would cook itself with this kind of entrance. These stories have a kind of dirty charm, because a story cannot go badly from here, unless it goes very badly. Either way you are in for a treat and you cannot help but smile at yourself in expectation of the carnage.

Dene Barnes manages to make the mundane spectacular, or perhaps it is the other way around. Whichever the case, things that should contradict each other are forced into the same space. Talkback and feedback dance together like a ballroom waltz held in a paddock. It is a damned mess, but still it has structure and the fun grows out of pretending that it is more ridiculous than if everything were normal. The joke is on everyone, and the serious leave confused, because surely it is not on them: the intellectual precariate!? Perhaps they will go home and whip themselves with footnotes, and so salvage the day.

For myself, I am giving you that which you have already got. Not physically of course, because that could go very badly if you do not have hands. The joke would fall flat. I mean that I’m giving you something that looks clean and serious and precious but is secretly asking you to step down into the muck with us. The descent is more fun than you may think and anyway it is just for a bit.

(Olga)
If JG Ballard’s post-apocalyptic, science fiction novel The Drowned World (1962) has become recognised as a key founding text of climate fiction (cli-fi), it is fitting to frame Drowned World—a group exhibition by three Otepoti-based artists: Dene Barnes, Jackson Harry, and John Ward Knox—as a half-centenary tribute to Ballard and our own slowly drowning world. As with the central role of geology in defining the Anthropocene—the epoch in which pollution and waste produced by primarily industrial nations is present in sedimentary layers of the earth—the exhibition Drowned World can be approached in terms of sediments and layers: conceptually and materially.
Dene Barnes’ found object sculptures of brick, mortar, and steel are seemingly located in the bedrock of the earth, but are oriented to face the sea, ongoing capitalist gentrification, and rising sea levels by way of their titles, Harbourside Redevelopment (1–5, 2022). These small sculptures sit somewhere between mock maquette and altar piece and offer small portholes of vision through the negative space of the bricks.
Installed primarily on the gallery floor, some of Jackson Harry’s bronze and acrylic sculptures of old, hard-edged, Oldsmobile sedans appear partially submerged. Harry’s sculptures perhaps speak to the ubiquity of cars and the vast amounts of fossil fuels extracted to run them — and their contribution to harmful emissions.
In what may be a contextual overreading, John Ward Knox’s finely detailed, black and white oil paintings of hands on silk perhaps ask, "are these the hands responsible for the drowned world?".