​On The Way To Work 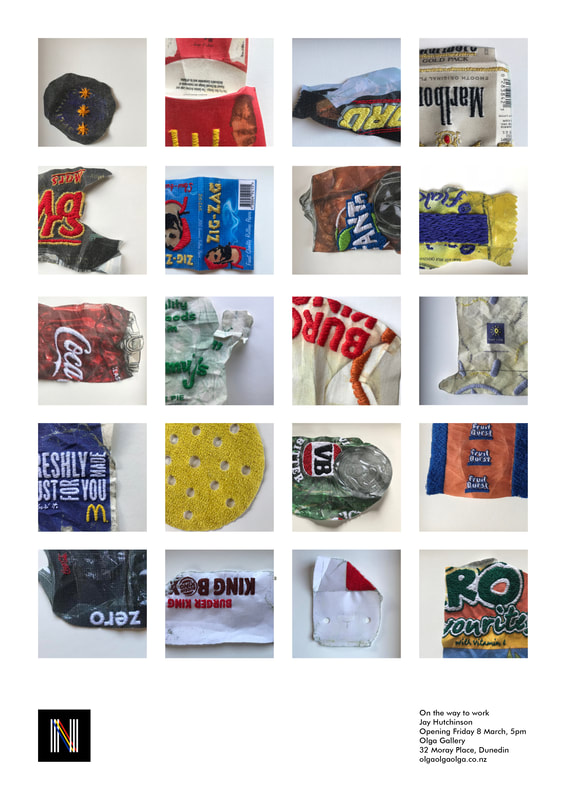 ​Jay Hutchinson is a New Zealand artist based in Dunedin. He graduated from the Dunedin School of Art with an
MFA in 2008 and works with numerous mediums including hand-embroidery, performance, drawing, video
and fabric construction. His most recent projects have explored product fetishism, the devaluation of the​
worker and our decaying economic system.
''On the Way to Work'', Jay Hutchinson (Olga Gallery)
​Jay Hutchinson latest exhibition at Olga Gallery continues his ongoing exploration of the urban environment with a sonnet to detritus. The artist has photographed litter he has seen on the roadside during his daily commute, and used these photographs as a basis for embroidered works on printed canvas.
Hutchinson has long been fascinated with urban life and the borderline between art and pollution. Some of his misspent youth was involved in tagging, the large and often baroquely embellished graffiti signatures often seen around a city.
As such, his move to professional art has seen him questioning the often arbitrary line between high and low art, and also has led him to the understanding that commercial branding is in itself a form of professional tagging.
Even after a product has been consumed, its logo-adorned wrapper will often be found as roadside litter while simultaneously continuing to advertise its product.
Hutchinson has subverted the idea of rubbish being an unattractive pollutant byproduct of commercialism by reclaiming it as art and presenting it in the gallery space using that most delicate and even genteel of media, embroidery.
What was literally throwaway has been elevated to something of commercial and aesthetic value, and this has produced a pleasing, thought-provoking and wryly witty exhibition.
James Dignan, Otago Daily Times, 28 March 2019
OLGA Dunedin