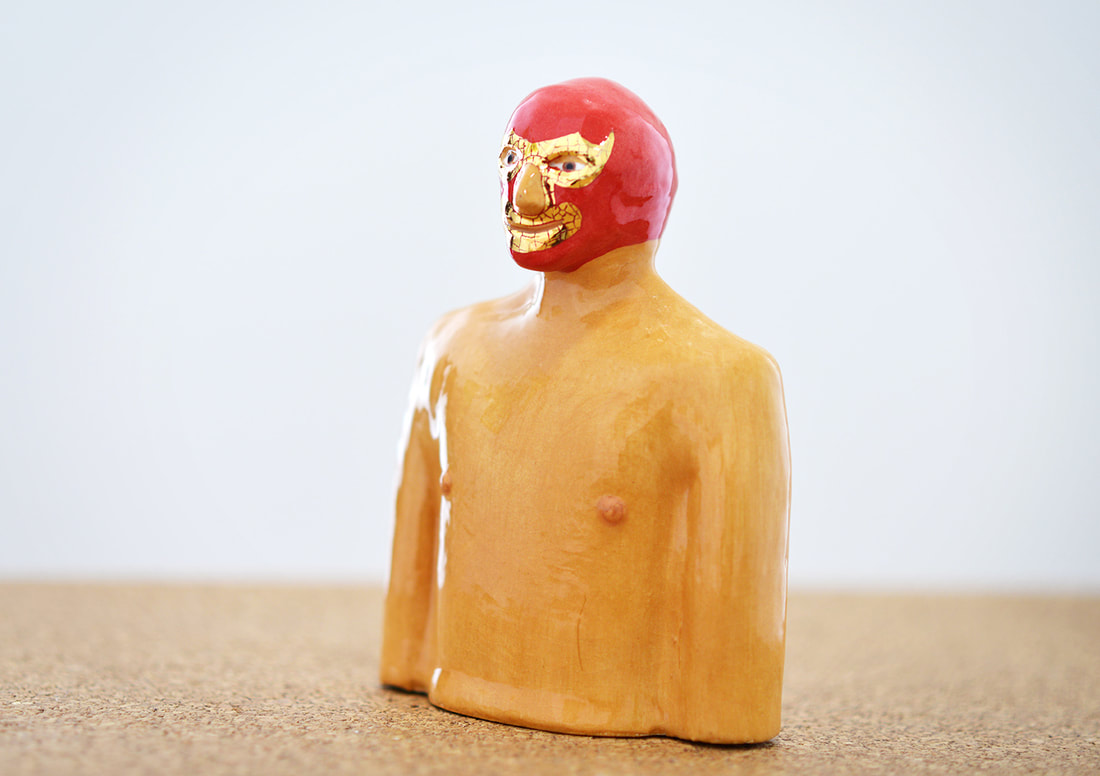 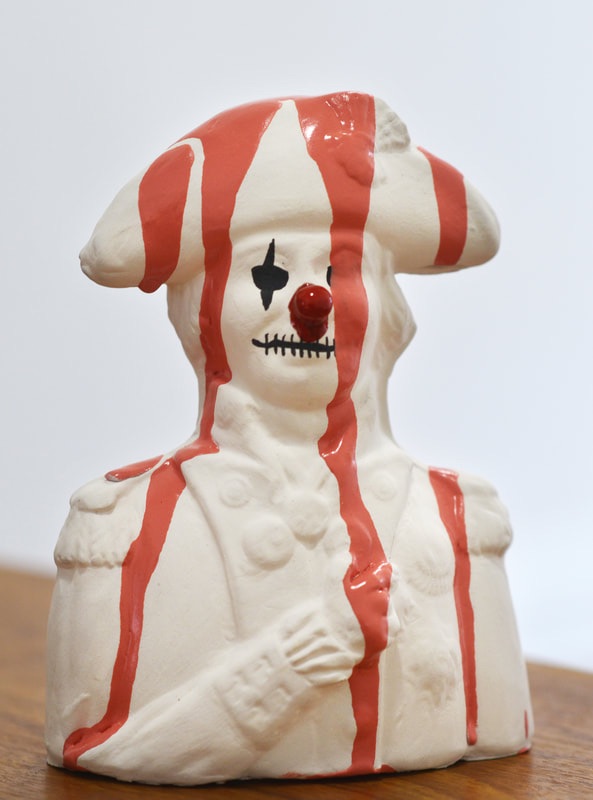 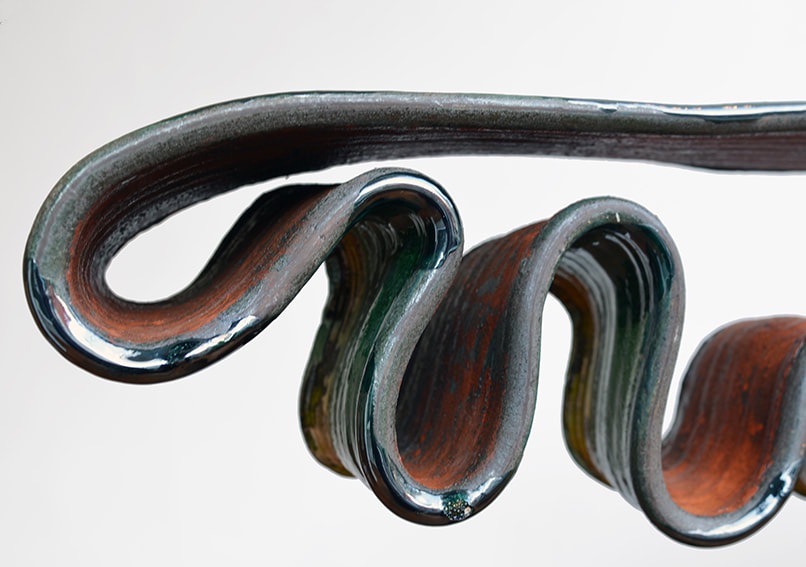 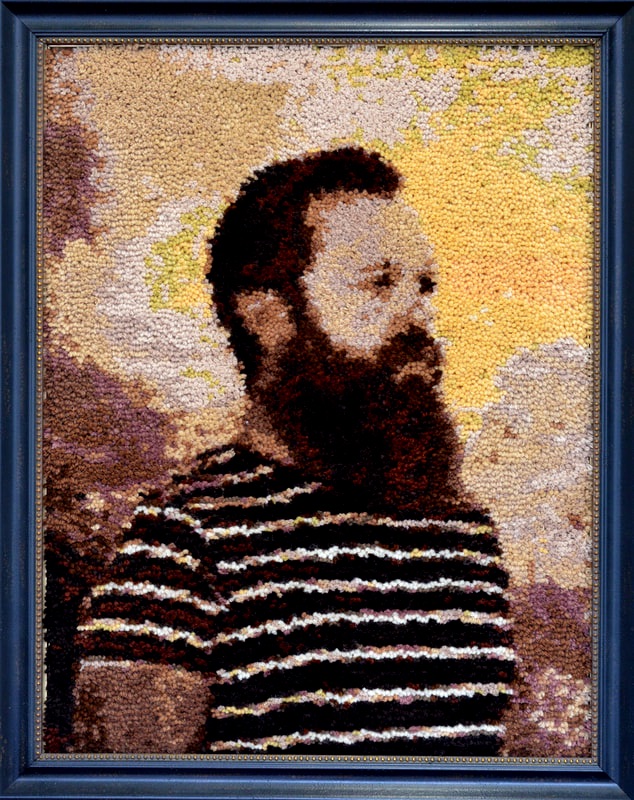 
This circus-themed exhibition evokes elements of the carnivalesque in the sense theorised by Mikhail Bakhtin whereby the expected, the everyday, and the status quo are upturned — in this instance by ceramic and latch hook, woollen works (which Bakhtin may not have foreseen). Think whimsically ostentatious art-adornments (ceramic rings by Madeleine Childs), louche ceramic ghosts and a queer merman bag (by Mark Rayner), and macabre, decolonial reckonings with Captain Cook by Paul Rayner. This is a maximalist show.
Childs (she of the Ringmistress) has paired small-scale rings with two significant earlier, large works from 2005. Kronkelen, which is Dutch for “squirm”, achieves this precise feeling in a band of curlicue wave forms that almost resist stasis. The circle reappears in Cirklevorm — a floor-based sculptural ceramic piece that encircles many small ring works inside.
Not enough can be said about Mark Rayner’s Cleo Man Bag, which combines woolly mammoth tassels with a sinuous and svelte otter-like merman form on the bag. The presence of an adjacent self-portrait rug work by this brother, suggests he may be merman depicted.
In conversation with many of the protests against public statues of colonialists and slave owners in South Africa, the UK and the US, Paul Rayner imagines a range of possibilities for the coloniser James Cook. The titles of Rayner’s maquette-sized sculptures of Cook include: Tarnished, Cancelled, Mocked and Desecrated.
When the brothers collaborate on a work, Mickey Mouse with gold pox and Frankenstein plugs is one outcome.

One appealing solution to this nation’s ongoing colonisation: smash a hollow figurine. That thrill
comes from the relative power we feel in pitting plaster against a concrete floor. It was a thrill
ceramicist Paul Rayner forewent, however, in labouring to create his six subversive reminders.
Captain Cook or Governor Grey are presented in full regalia with shed blood thrown back on them,
and titled in the primal screams of Tarnished, Cancelled, Mocked, Beheaded, Desecrated, and
Defaced: these objects are one artist’s retrospective justice. These busts are either in unglazed clay
—multiple like place holders, as some ambassadors are—or in a smothering chrome finish, and
always eyeless; not that eye-contact with today’s art enthusiasts would have rerouted history. Garish
glazes blister down their naval caps. While I’m wary of both the Crown’s unforgivable violence and
of Rayner’s justly violent response, as local writer Hana Pera Aoake has said, ‘Feelings like
resentment indicate a breakdown of colonial subjection and thus open a space up for alternative [...]
practices.’1 So what does Defaced do for Indigenous self determination?
Rayner opted for creation, patience, and process.

Rayner’s brother, Mark Rayner, hand models foot-high busts of comic book characters: a wrestler, a
brain, a Mickey Mouse with covid antennae, a dick with the face of a ghoul, and endearing,
diminutive, orange-eyed devils whose menacing or gormless expressions make them look only
peeved, them having no stature. These kitsch creatures diverge from the comic world in their
sombre, throw-back glazes. Slurries of red, brown, and beige; acerbic yellow and orange on an
undissolved, granular brown; also deep blues with green flares. A nod perhaps to retro pottery.
Rayner Bros Circus coincides charmingly with the celebration of sixty years of Ceramics NZ, the
national potters’ association. Rayner’s finesse of production and attention to detail is further
demonstrated in three plush, pixellated, latch hook self-portraits, including Cleo Man Bag with its
beard-like boa shoulder strap. They’re wryly provocative. Sumptuous.

Madeleine Child, meanwhile, has rolled, twisted, pinched, and fired a gazillion dazzling rings.
These geometric wonders, although impractically chunky, don’t actually feel half bad on. Like silk-
lined jackets, precious metallic glazes are often to be discovered in the rings’ crevices. In Child’s
characteristic wild palette—this time of navy, lilac, lipstick red, radioactive orange, split pea yellow,
and washed out blue—glazes are dabbed, but not in a slapdash way; if slapstick. Among these rings
are blingy pacifiers, wire springs, and crowns. Some are folded intricately like dumplings, others
are punctured like tealight holders. But they don’t need candles; these rings are a source of pure joy.

Creation, patience and process make for both nightmares and dreams in this circus.