Neil Lowe (b. 1972, Zimbabwe) is a technologist, multi-
media designer and artist residing in Dunedin. He holds a
BA (Theory of Literature and Linguistics) and a BA
Honours (Multi-media Design), both with distinction, and
is about to embark on an MFA at the Dunedin School of
Art. His work has been shown locally and at the Museo
Reina Sofía in Madrid. Immanence is his debut solo
exhibition. 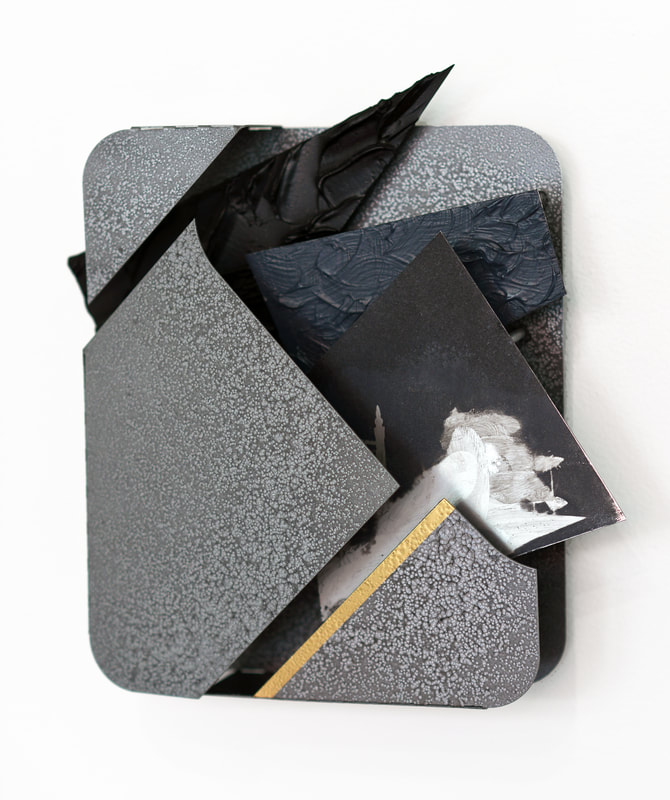 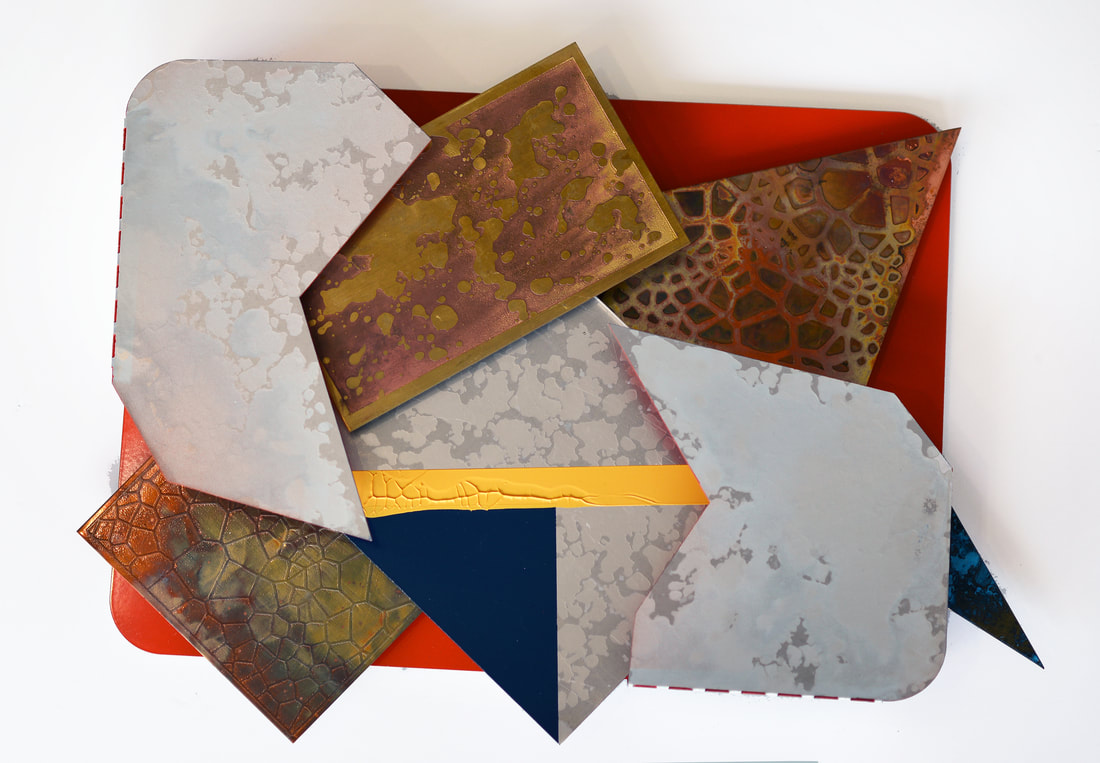 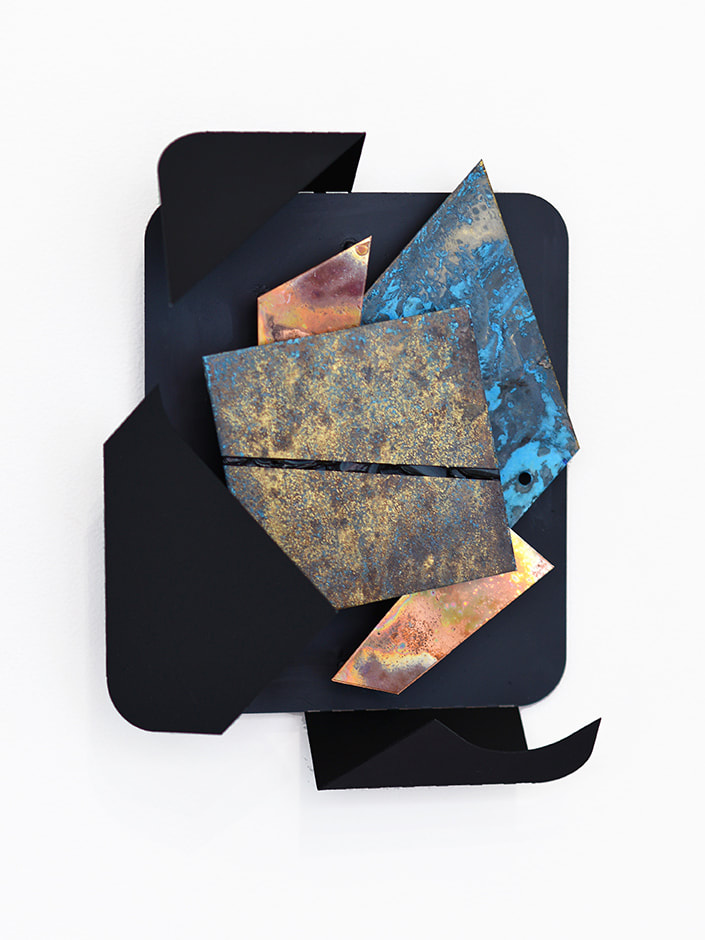 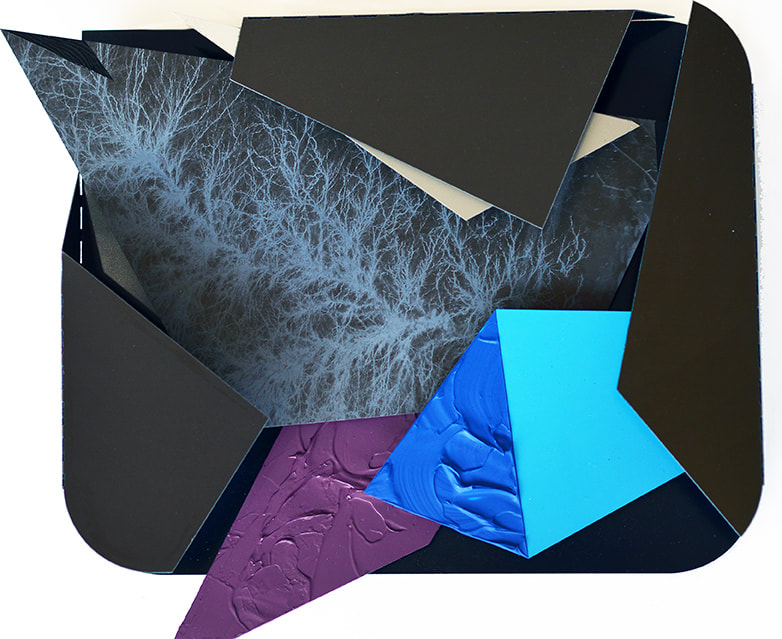 Etude in Indigo (Tempest) Folded, perforated anodised aluminium, aerosol, acrylic, laser etching $ 1 600
​Neil Lowe: Immanence
There’s a hole in the wall I can’t get through…
Art occupies space. One way or another: a painting on a wall, sculpture on a pedestal, video on a
screen, installation in architectural space, the space in your head, words on a page. For the most part,
each has its specific time and place.
But sometimes artists choose another space - one that’s quieter and not so much uncontested as just
restless, fluid, doesn’t want to sit still in a corner. It’s in there that I think you’ll find Neil Lowe digging
away.
On first glance these things of his, these Etudes, are shiny cool, precise objects we might associate in
form at least with the specific objects of Donald Judd’s mid-sixties New York or, from another vantage,
LA cool school Robert Irwin and John McCracken. There’s laser-cut aluminium and copper here,
anodized, sprayed, acid-bitten and photo-etched surfaces; and a degree of industrial technique and
manufacture tempered by baroque-like flourishes of paint with the whole object leaning in to a take on
Frank Stella’s much under-rated relief works. I say under-rated because it’s the big black, flat shaped
canvases the history books favour over all else. It’s the purity of conception, the attention to flatness as
an aim in itself. If I wanted to go further back there’s Malevich’s architectonic forms and dynamic
shards of light, and the celebration of the revolutionary potential of radical form via Rodchenko and the
Constructivists.
Whatever way you cut it these are works of abstraction, but it’s of a kind inclusive of the image where
required. Lowe is no purist. The choice of drop-tone found imagery in Dunedin’s old Bell Tea building
or a smeared render of the Arthur Barnetts horse and cowboy might not have the death row intensity of
a Warhol electric chair, or for that matter Richard Prince’s Malboro Man repro-reproductions, but it’s of
loss nevertheless, and a definitive vote too for the Regional in languages frequently subjugated to the
leveling effects of the International.
There’s a lot of metal in play here. By all rights the Etudes should feel heavy, industrial even. Instead
they appear to float off the wall, casting intricacies of light and shadow. There’s an intimate connection
to the space and time of their presentation with angle of viewing and temporal light contributing to the
experience of sharing a space with them. Orientation definitely has a role to play. On the wall, the
Etudes cleverly fulfill their relief function, sitting or floating somewhere between painting and sculpture;
the different planes jump-cutting across the outer reaches of colour theory, moving through powder-
coated and anodized fluoros to raw metals and light-sucking industrial matt black with thickness,
texture, exotically melded/welded to create cohesive compositions out of the oppositions of flatness
and depth. The contract with the viewer requires that we come in close to look at the planes, spaces,
recessed colours and events happening within each construction. That these planes are as often
shards that protrude somewhat malevolently out into the viewer’s space dispels any notion that Lowe
wants to make the act of looking a seamless one. This is an active opticality over passive. Beauty
comes at a price.
I have no idea if there’s any intention by the artist to do so, but laid side on there is an effortless
conversion to sculptural object, and the previous read picture space is suddenly a speculative
architectural one, layered geometric pavilions displaying a looping oscillation between the open and
the closed. At the same time these are objects you want to hold, if not exactly caress. The exquisitely
perforated folds almost invite the viewer to finish that act of folding for themself. I think of Lygia Clark’s
Neo-Concrete Creatures sculptures where viewers physically manipulate a series of articulated metal
planes and thereby become involved in a work of transformation. That such a communal experience
might then radiate out into the wider socio-political sphere was always part of the thinking for Clark, her
friend Helio Oiticica and other Latin American practitioners of the sixties. There’s no reason such ideas
should be consigned to the history books. That some abstract art is able to affect these conversations
without fixed narrative and propagandist potentials is what ironically provides its political potential. It’s
ridiculous that to this day a case for abstract languages needs to be continually reiterated. But so be it.

If these knowingly constructed reliefs are indeed the “assemblages of found ideas” Lowe likes to call
them I think it’s fair to suggest he is continually making such connections throughout his work. At the
same time it’s missing the point to read them solely through the historical touchstones I’m choosing to
cloak them in. If I’m bringing these various names and historical works into play, it’s because these are
things I ‘find’ in the pieces. It’s the field these Etudes crash land in. It’s not a question of origins so
much as threads of conversations and echoes woven / folded (?) through time and space. No doubt
you’ll find your own. This is the game in play.
For me the ‘found’ refers equally, or even predominantly, to the artist’s own sense of discovery made
possible via the physical act of making. Through embracing a myriad of processes, materials
workshops, labs, and studios he positions his practice in a state of ongoing experimentation. It’s a
sound strategy for an artist looking to tease out and construct a highly personalized language in a field
ever at threat from the generic.
There’s another aspect I haven’t covered. It’s right there in the title of Etude. From brief conversation I
know the individual pieces usually begin with, or come out of listening to classical music. In musical
terms an etude is a study leading to a composition around a singular technical problem. Translated
into visual realms a study, or let’s call it a sketch, by its nature leaves much that is open. A sketch that
is final is only made precise by its looseness. It’s constantly on its way somewhere. And of course it’s
always been somewhere too. Conceptually then, a smart way to name the series. But it’s something
more than that. The idea of functioning, direct correlations of music into material form or artworks is a
well worked over one, and highly problematic at that. Yet a piece of music, like any other abstract
artwork can be highly associative, can set the field, provoke movement and emotion, sensorial and
intellectual pleasure for composer and audience alike. More even than it is heard, music is ‘felt’. This
assertion of the place of feeling within what might appear an otherwise outwardly formal abstract
artwork is a welcome one; especially so when it occurs without recourse to tired tropes of pastiche and
parody. I have summoned up some of the avenues Lowe’s work might fairly be followed down. But
finally these all become more simply components or notes in a practice seeking the perfectly restless
cohesion of music. That they begin to reach this state, even as they remain steadfastly material and
process driven objects, tells me that there’s hope yet for this material world.
In a world gradually dissolving from matter into matter-less virtual realms, and endless circulation of
information in the guise of knowledge, Neil Lowe follows the music and deploys his own precision of
form, process, material choices, embedded time in the faktura of the raised brushstroke, colour,
occasional image, capture of temporal light and shadow on gallery wall, all of the fine shifts between
tight and loose, decisions made apparent rather than seamless, to offer his audience an experience
aiming to be ‘felt’ as well as seen.
There’s music playing somewhere in the background.
We alter our angle of view along the wall, keep on digging and, give it time, our way of looking at the
world shifts too.
Change is immanent.