​​the sunlight lies down across everything 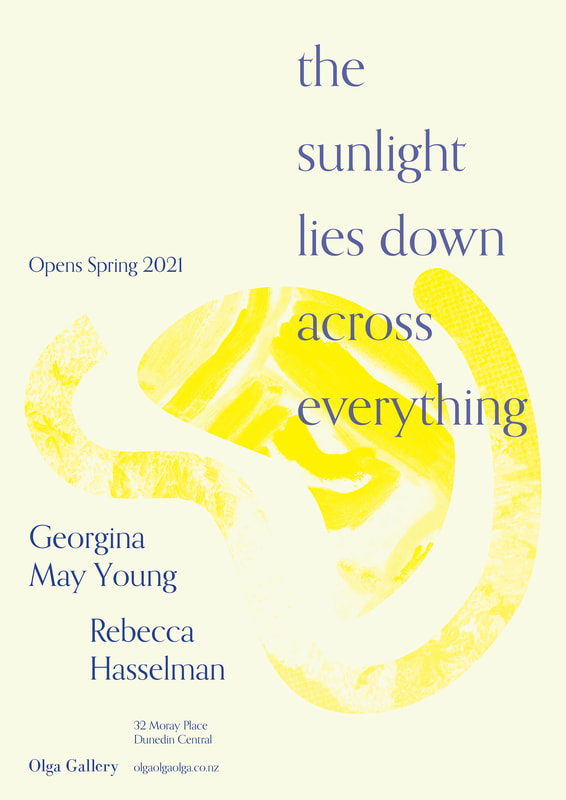 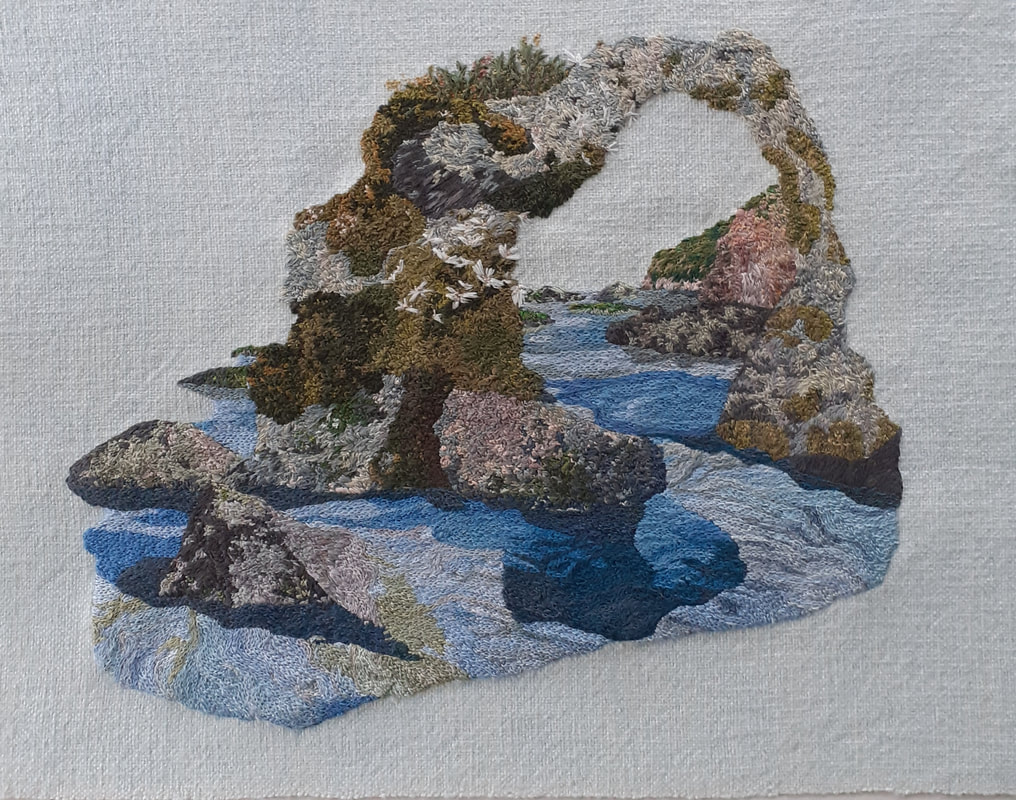 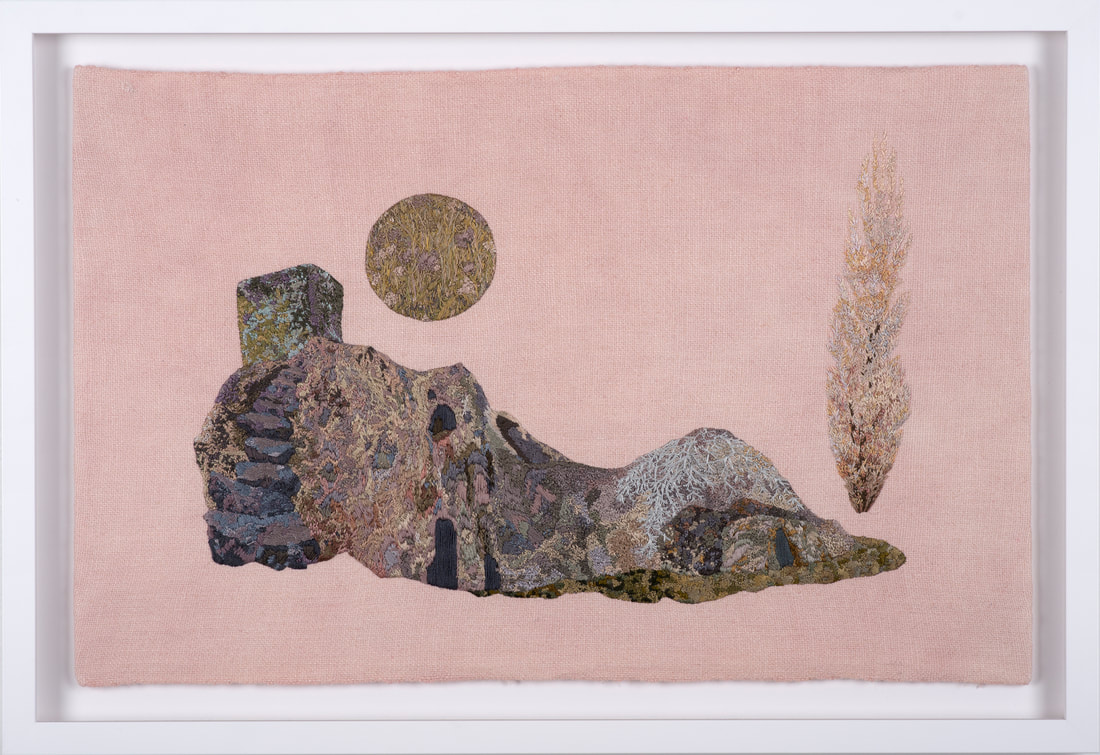 Georgina May Young, Heard a message in the blowing leaves to meet you at the tallest tree, 2020, cotton thread on handwoven linen dyed with madder, lichen and procion dye, 640x360mm 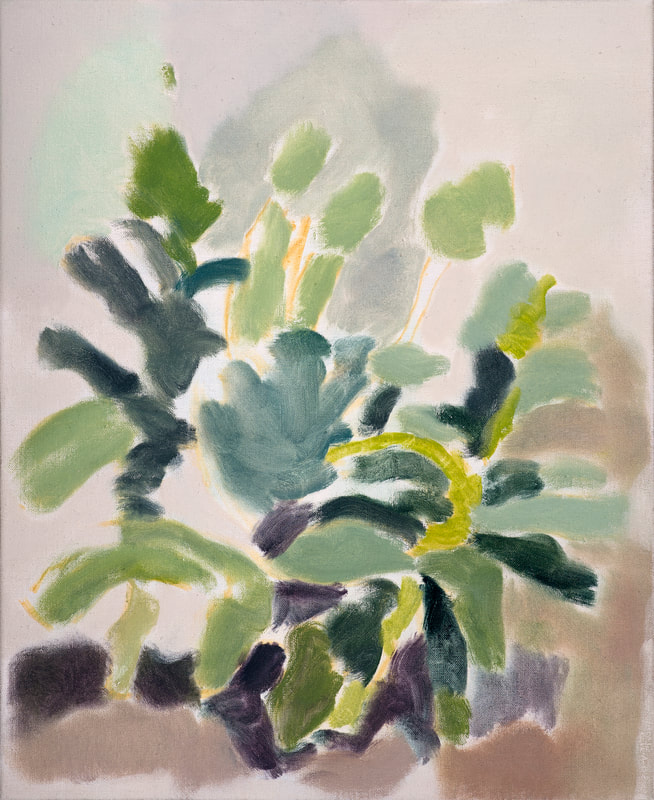 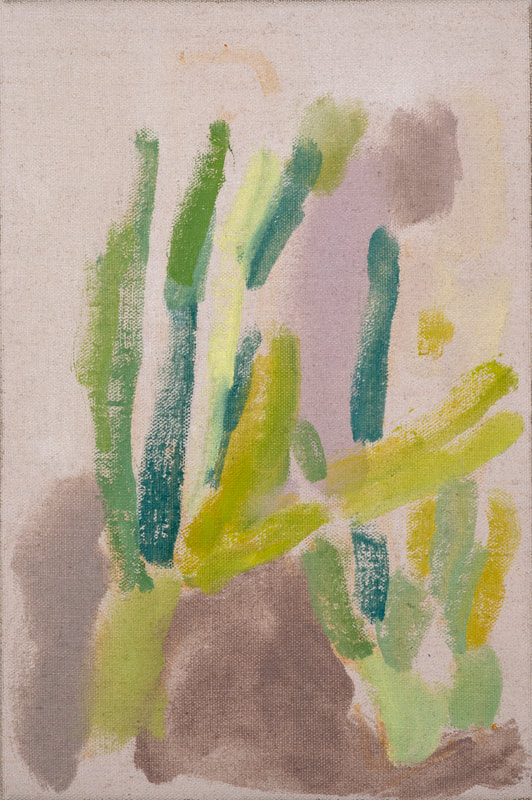 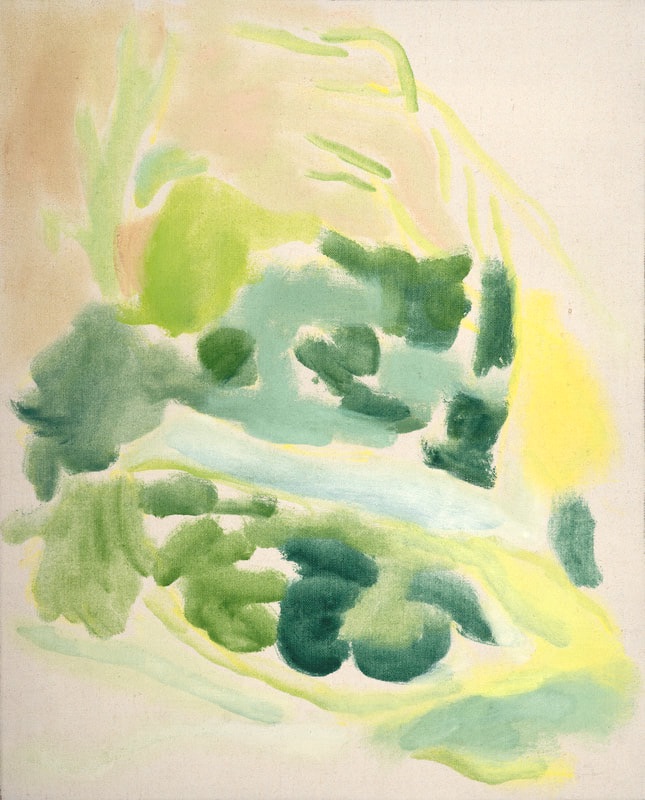 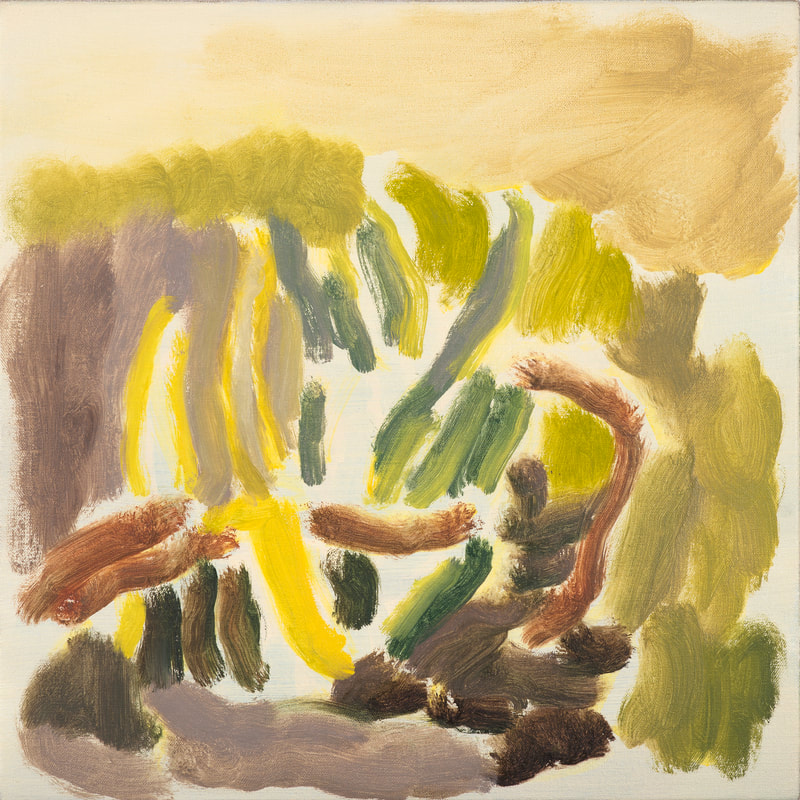 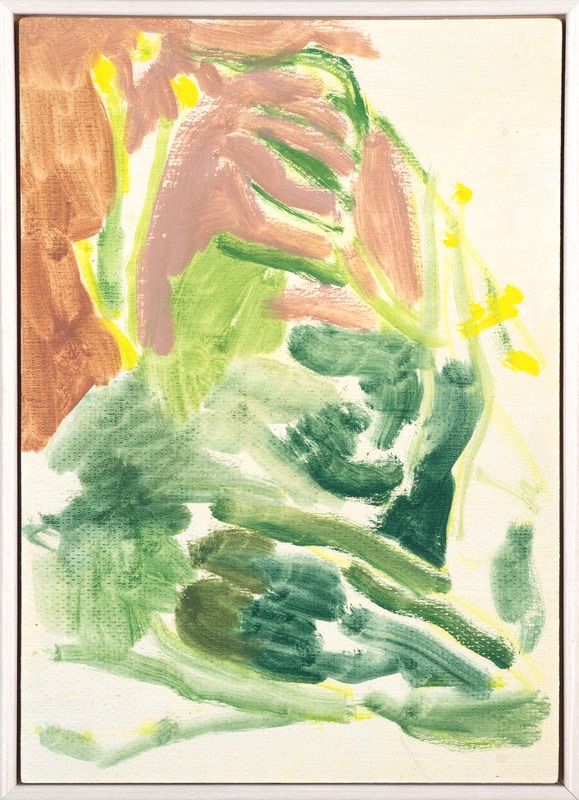 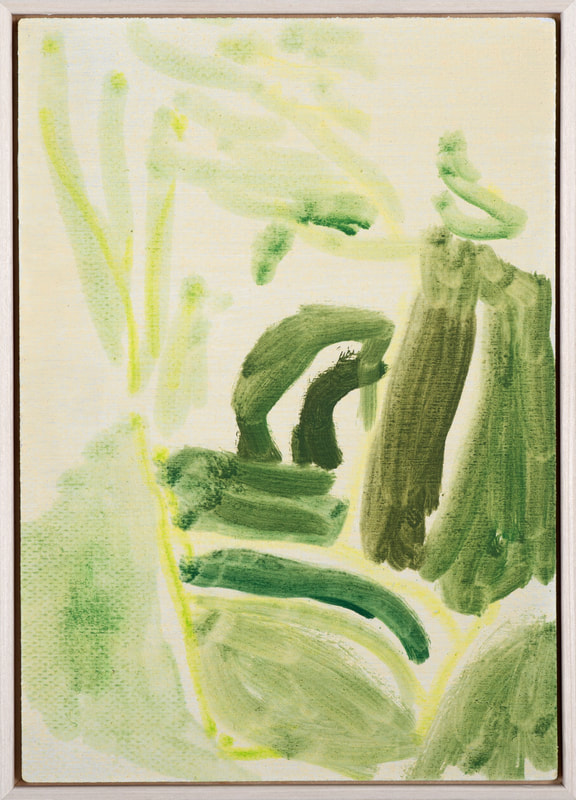 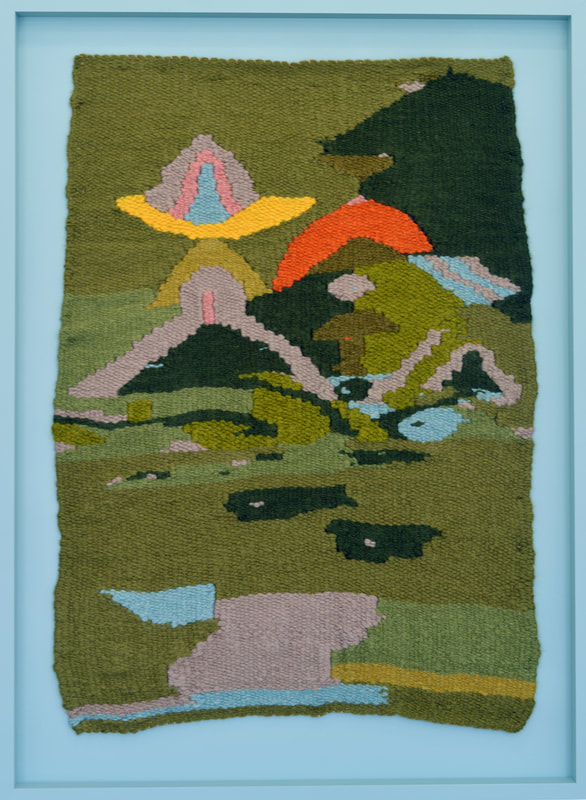 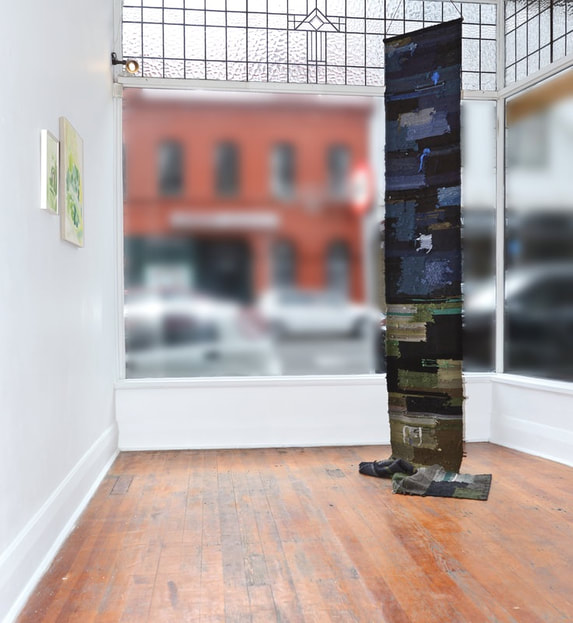 The sunlight lies down across everything brings together textiles by Georgina
May Young and paintings by Rebecca Hasselman. Local poet Lynley Edmeades
responds with five beautiful, insightful poems.

More unfocused than abstracted, Hasselman’s landscapes glow. Recalling the
style of the late artist and poet Joanna Margaret Paul, edges are unwanted: a
river, shrubs, trees and clouds are all interiors. Hasselman depicts what is
inherent in her subjects. Here are burrs and scuffs; hue speaks for itself.
Lemon, olive, and teal assemble on a cream ground. Fingers of green leave
concentrations of pigment where the brush lands, and where it lifts off. Applying
size only to the back of her stretched linen, acrylic and oils are absorbed into
the fabric, giving these artworks a softness and integrity. But these works are
also powerful.

Ripening expands in a viewer’s face. Like the peripheral eye-burn you can only
track and never catch, these strokes appear to be in constant motion.
Brushstrokes direct outwardly from the centre resulting in an exuberant,
scurrying effect. Or again, these strokes jump like rain thrown aside by
windscreen wipers. Hasselman shows a mature awareness of how colours
behave in close quarters. Because her colours are muted,—every hue
restrained, either withdrawn with a touch of white, or anchored, mingled with
blue—it is the direction of strokes, primarily, which effects Ripening’s ripening.
Hasselman creates aliveness by moderating her palette and striking up motion.

I love oil’s optimism in these six paintings. Oil paint, as a medium, has zest. Its
versatility allows for fat, wet strokes as readily as for searching gestures that
allude to scudding clouds. Hasselman also paints on hardboard. This particular
hardboard has regular indentations, it resembles pressed gib board or a
comforting, dated building material. Looser (wetted) paint pools in these
recesses like ink on skin.

Beside these vibrant, exploratory paintings, Young takes embroidery to a new
realm. In Tōtara Resonance, heather and foxgloves amass over boulders in the
foreground of alpine slopes. A tōtara branch, with the atypical softness of
upward not outward-pointing spikes, levitates over a pool of negative space.
Here is an artist skilled in shading and blending with none other than
embroiderer’s cotton. Her channels swirl as realistically as kelp spun in tidal
washes. A viewer tracks these threads like a maze, flows, then arrives at itchy
dead ends, and traces back to surfaces knotted as densely as moss. This
richesse of detail is portal-like; the subjects are decontextualised in madder
dyed, handwoven linen. In another work, lichen packs thickly in achingly
harmonious hues. Recurring, interslotted ‘v’ stitches result in fishtail braids – the
branches of a cypress So self-contained as to seem collaged: full moon,
cypress, and bedrock. This is a tight, wondrous sci-fi.

In fabulous contrast to Young’s intricate embroideries, rough, thick-ply yarns are
tightly woven in her Sun Maunga. Saturated hues on a ground of browns give a
retro vibe to the piece. Mustard, cinnamon, vermilion, black bear, dehydrated
pink and schist interlock like a colour-by-numbers. This weaving is a good time.

Young’s indigo wall hanging, Woven Landscape, woven with fabric remnants
gifted by friends, presents to me all the ways colours want to be together. Aptly,
she emphasises the junctures, the joins, the holds. Longer than a lifetime, this
textile reads as intergenerational: two meters of surplus artistry pile up on the
gallery floor.

(Olga)
The “everything” that sunlight lies across in Georgina May Young’s textile works and Rebecca Hasselman’s paintings is the more-than-human world of rocks, grasses, trees, flowers, and land formations. In Young’s work, the sunlight also grew the madder roots and lichen the artist used to dye the linen support she wove by hand. Such a thorough approach to process is similarly evident in the meticulously hand-embroidered compositions Young stitches to create intricate textures. In some instances the colours and densely layered stitches evoke the mottled surface of lichen on rocks, while in other works the round of the sun is comprised of meadow grasses and flowers. In these two examples Young deploys the combination of colour, texture, and pattern to form both realistic scenes (lichen on rock) and imaginative or allusive figurations (sun of meadow flowers). This mutability is also readily apparent in Young’s approach to scale. In Totara Resonance (2021) for example, an outsize totara seedling hovers over a considerably smaller abstracted lakeside scene. The precision and mutability of Young’s works draw the viewer in towards the compositions and invoke a meditative quality.
While several of Hasselman’s paintings elicit a comparative calm, works such as Ripening (2021) seemingly open outwards beyond the canvas: an effect attained by apparent rapid brushstrokes applied radially from the centre of the composition. Shifting between abstraction and (highly abstracted) figuration, the presence (or absence) of land and riverine formations or plants relies on spare brushwork and an earth-bound palette.