‘Viewfinders’ draws together works from artists Simon Attwooll and Philip Madill. Each interrogates the indexical nature of photography, historical truth, tensions between analogue and digital technologies and the relationship between the viewer and the viewed.


Runs to May 24
Viewfinders is an astute and informed curatorial pairing of two artists (Philip Madill and Simon Attwooll), who work to varying extents (and aims) with found photography. Madill’s principal and interconnected research areas of the Cold War and space race, and his aesthetic tone of the thwarted (or absent) individual in absurd situations may be familiar to local audiences. Attwooll works with found images from a similar era, and in particular with a cache of photos formerly belonging to a retired police officer. While Attwooll purchased the collection from eBay, the seller found them at a flea market in Amsterdam. It is generally not intended to be evident whether Attwooll is using the officer’s forensic photographs or the personal ones included alongside them in the cache.
In contrast to Madill, who creates compositions inspired by found imagery subsequently executed in graphite, pastel, or pencil on paper, Attwooll scans the positives, screen prints either the entire image, or an area of it on to aluminium composite material (ACM) then paints with primarily geometric elements such as lines or shapes. In Attwooll’s Documentary Shadows (2020-21), an ambiguous, green screen-printed image is overlaid with orange lines, irregular shapes, and circles in acrylic paint. The frame is painted the same shade of orange.
A particularly compelling work (Untitled, 2015) by Madill depicts a siphon-pincer, "soft shell" machine inserted or crushed into an old car. It is uncertain whether the machine is extracting or inserting unknowable matter. 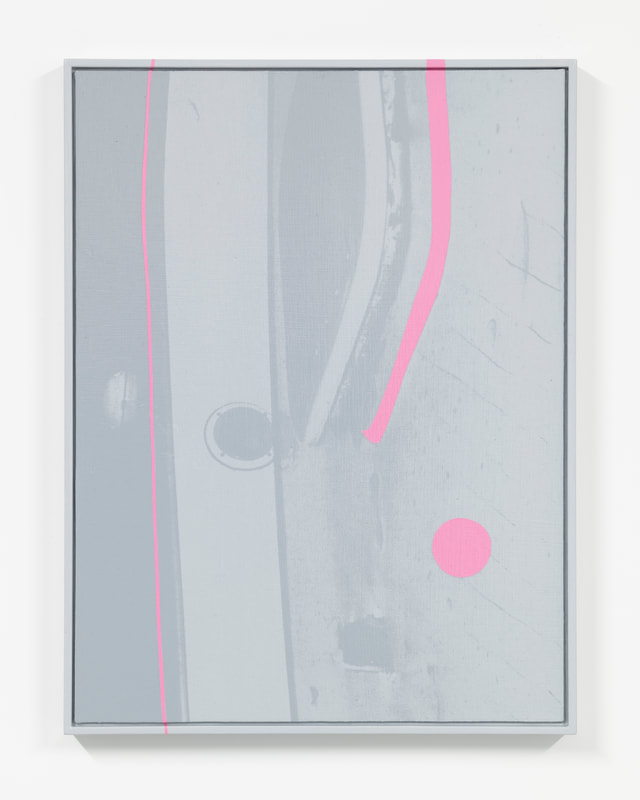 Simon Attwooll "In through the out door" Acrylic and screen-print on ACM panel in custom frame. 315x415, 2020_21
OLGA Dunedin