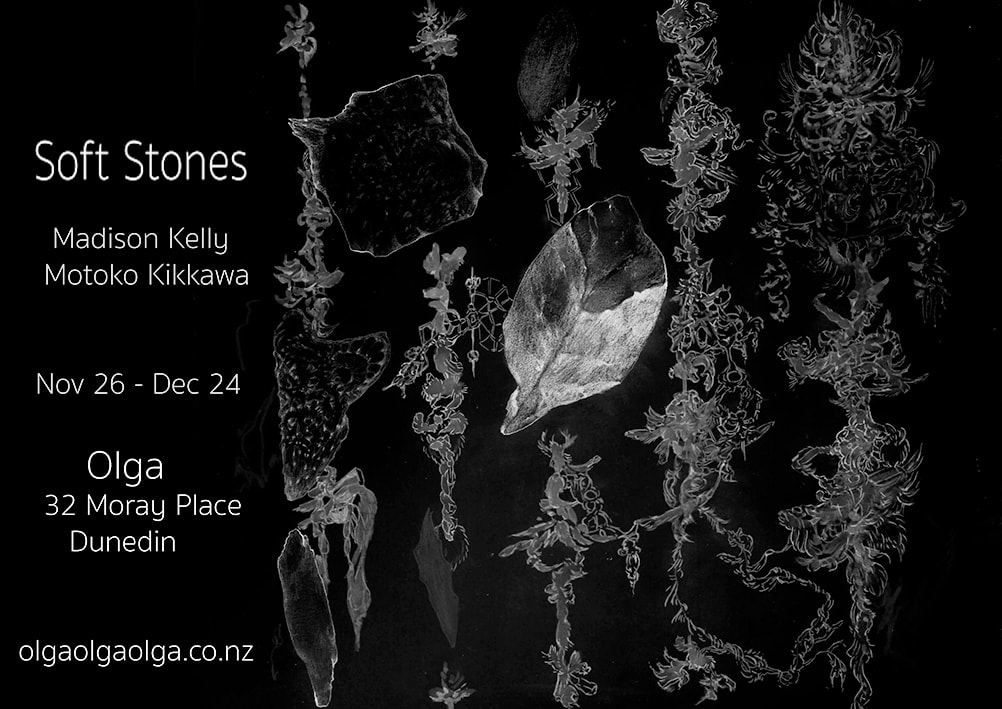 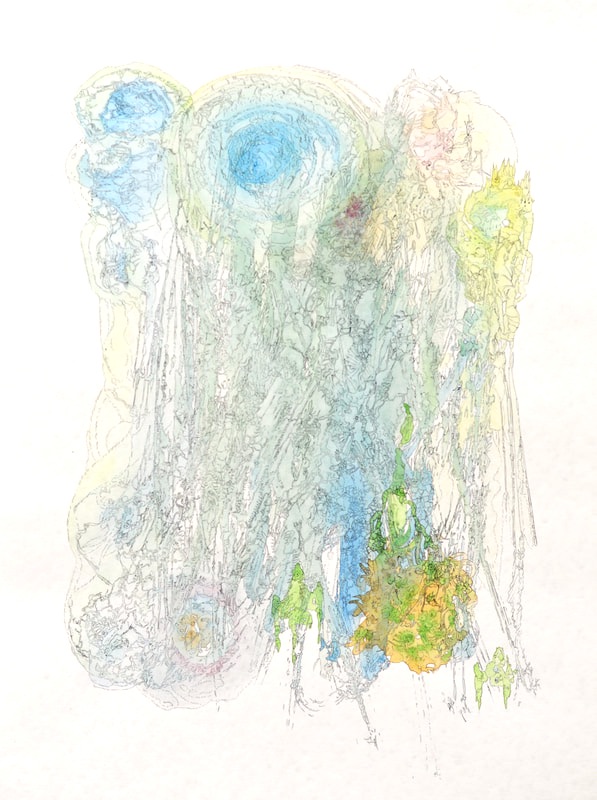 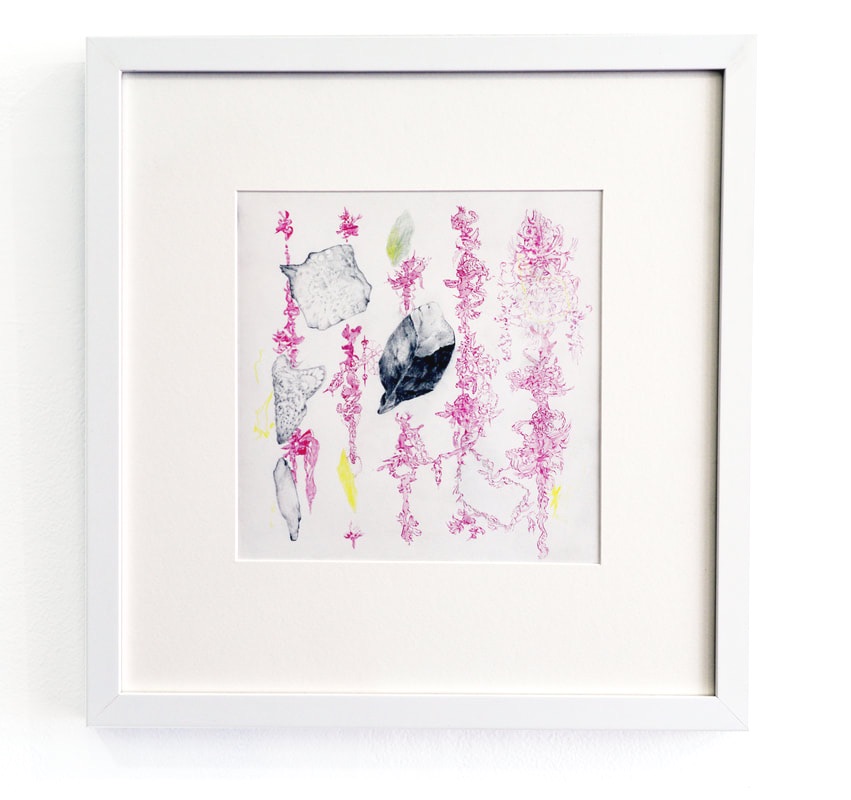 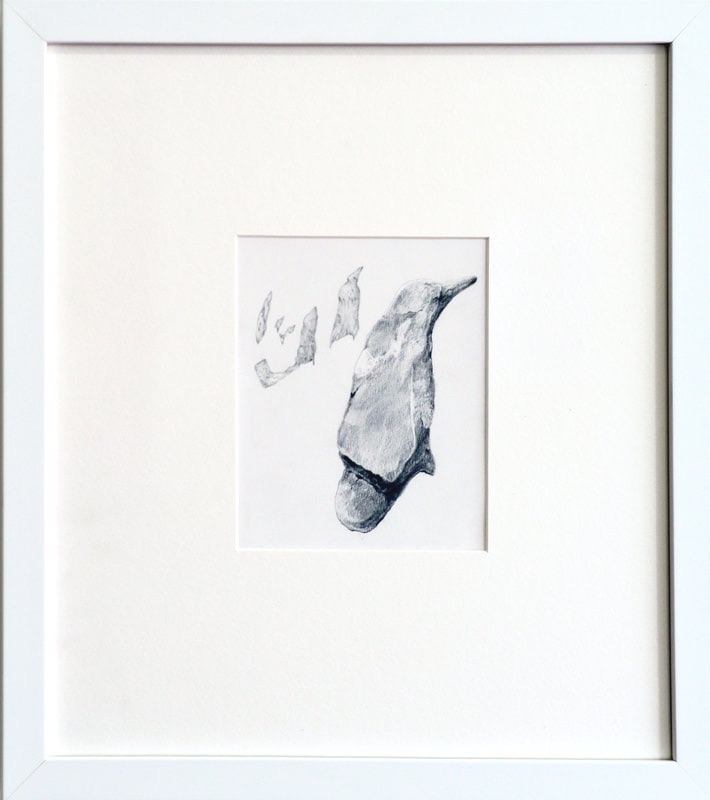 Motoko Kikkawa and Madison Kelly,' little bird I filled in', graphite on paper, 2021 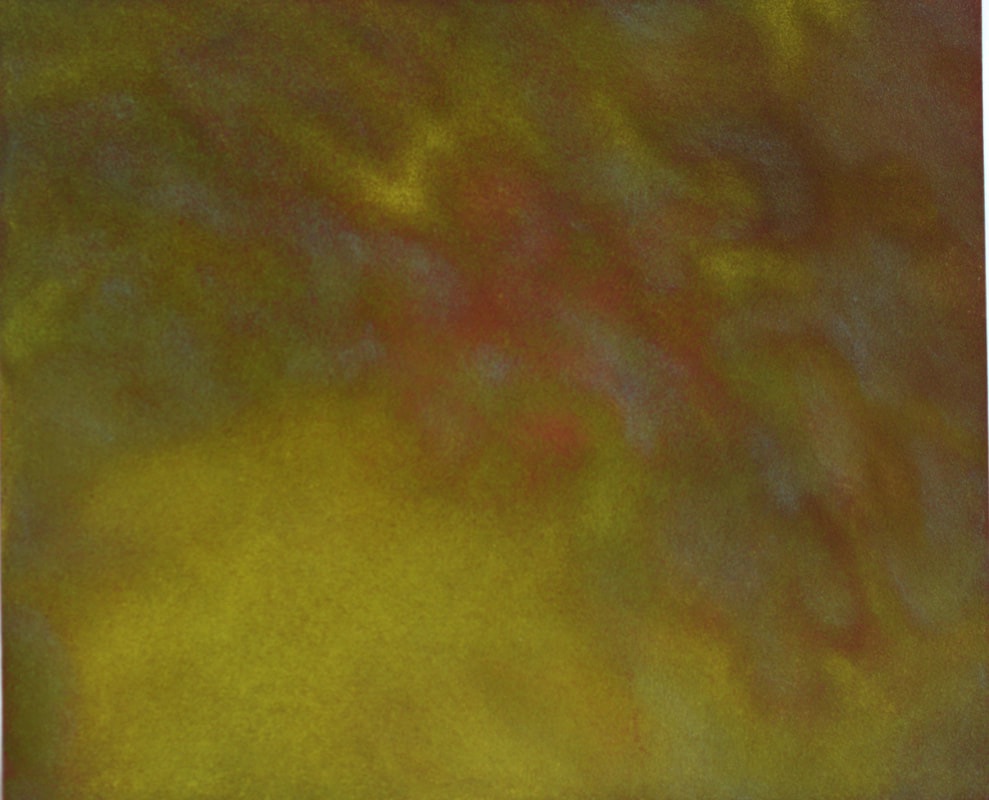 A soft stone is malleable and a little porous. It is less a meeting of opposites than a middle ground where softness meets the obdurate. A soft stone could be called a collaboration. It could also be called "canopy shyness", where the uppermost foliage of a forest canopy collectively yields so that all can receive the sun. A soft stone, a collaboration, canopy shyness; they are various names for a dual exhibition by two Otepoti-based artists: Madison Kelly (Kai Tahu, Kati Mamoe, Pakeha) and Japanese-born artist and musician Motoko Kikkawa. Two works in the exhibition are made by Kelly and Kikkawa in direct collaboration, Soft Stones and little bird I filled in (both 2021), and epitomise the mutual yielding of a forest canopy. In Soft Stones, Kelly’s graphite drawings of rocks are suspended between vertical calligraphic wreaths in pink watercolour by Kikkawa. The combination shouldn’t work, but it does. Kelly’s naturalist-style, black and white drawings and Kikkawa’s abstract, pink forms caught between calligraphy and seaweed simultaneously hold their ground and oscillate in a generative tension. They are two magnets that are attracted, yet that have not snapped together. Soft Stones is animated by this tension, this "not quite touching".
It is tempting to consider the rest of Kikkawa’s works in the exhibition as a mini-retrospective, as there are early works, including one from 2015 — when Kikkawa first developed her distinctive meandering, calligraphic style — alongside recent drawings. In addition to drawings, Kelly’s oil pencil on sandpaper radiate.

​Born in Hino, Tokyo, 1968, Motoko Kikkawa arrived in Ōtepoti in 2004 and quickly became immersed within its energetic sonic and visual arts communities. Kikkawa is a multidisciplinary artist working across sound, performance, improvisation, drawing, ceramics, textiles, paper, sculpture and photography. She works daily from a studio in Allbell Chambers in the Octagon.


Madison Kelly (Kāi Tahu, Kāti Mamoe, Pākehā, b.1994) graduated from the Dunedin School of Art in 2017, with a BVA(Hons First Class) in drawing. Grounded in field recording processes, her Ōtepoti based practice is concerned with interspecies histories and futures.